Take $35 off ANY purchase over $199!
Discount applied automatically at checkout.


WHY SHOP WITH US?

If you’re not using a 4x4 snorkel on your Rodeo you’re very likely causing your vehicles engine unnecessary stress, and will end up paying for it later.

As there are two types of snorkels, Ram Snorkels and Vortex Snorkels,  AirFlow Snorkels are RAM Snorkels. As the vehicle moves forward air is rammed down the scoop of the snorkel. Drain holes positioned at the base of the snorkel head allow the heavier dust and moisture particles to pass through, and allow the clean moisture free air to enter the air intake, where it is further filtered in the engine.

DESIGNED TO THE CONTOURS OF YOUR HOLDEN RODEO

The design allows the snorkel to fit flush against the guard, complimenting the vehicle and enhancing it’s style and appearance.

Aside from the above we also offer free shipping to almost everywhere in Australia (on any product over $150), have a great range of high quality products at excellent prices and LOVE what we do! If you still have any doubts feel free to give us a call on 1300 76 86 41, or contact us here. We'd love to hear from you.

m
Runva Stainless Steel Roller Fairlead m.P.
Product Quality:
Product Review: Good, well made, solid bit of gear,
Service Experience:
Shopping with 4x4 Down Under: Can’t fault the level of service you get from 4x4 down under, there’s a level of care for the consumer that you just don’t get at some of these other places that sell the cheap stuff, good to see a company that goes that extra mile to make sure your happy with your purchases! 👍
Runva Stainless Steel Roller Fairlead

For two seasons, me and my mate pulled up the cray pots by hand and it was exhaustion. Now we don’t even break a sweat. What a dream this hauler is to use and I love the quick mounting system as it does not change the look of my boat. 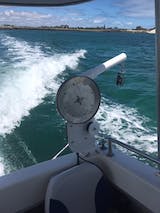